Tom Smith was a nice young man. He wanted a job, but he couldn’t find one. Many people wanted to work, and there weren’t many jobs. Tom felt sad because he never had money for clothes or the cinema.

Now Tom had a new idea. He thought, ‘Perhaps I can find a job in a sports shop. I’ll be happy then and I’ll have money.’ But it was only an idea. It never happened.

He tried hard to find a job. He looked in the newspapers every day and he wrote letters for jobs — a lot of letters. But he never found a job.

One day he saw something in the newspaper about a fair in the park near his house.

‘That will be interesting,’ he thought. ‘It’s next Saturday. I think I’ll go. Yes, I’ll go. I’m not doing anything this weekend, and it won’t cost much.’

On Saturday Tom walked to the park and bought a ticket for the fair. It was a warm summer day. The sky was blue, and the park was very pretty. There were a lot of flowers — blue, yellow and red. Tom felt happy when he saw them.

The fair was good, too. There were a lot of people there, and many different games. Tom played some games. He won a box of fruit and a book about sport. Then he bought an ice-cream because he was hot and thirsty,

‘I’m having a good day!’ he thought. He sat down and ate his ice-cream. ‘Now, what shall I do next?’

Suddenly he saw, in large letters: 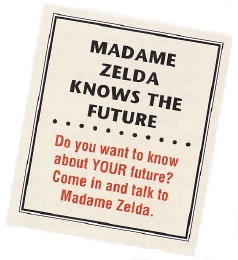 Tom Smith thought very hard. ‘Shall I go in?’ he thought.’Why not? I’m not afraid of the future. Perhaps it will be interesting. Yes, I’ll go in and have a conversation with Madame Zelda.’

So he went in. It was very dark inside. An old woman with grey hair and a kind face smiled at Tom.

‘Hello, young man!’ she said. ‘Sit down and I will tell you about your future.’

Tom sat down. The old woman looked at some cards on the table.

Tom took the cards and gave them to her. The woman looked at the cards for a long time. Then she spoke. She didn’t smile now.

‘Listen!’ she said. ‘I have to tell you something VERY important.

Do not go anywhere next Friday. Make a journey next Friday, and you will never arrive! Something will happen on the way. Don’t forget now. I can tell you nothing more. Be careful, young man.’

Tom left. The sun was very hot on his face. He had no more money, and he wanted to go home. ‘I’m not afraid,’ he thought. ‘I don’t go on journeys. I won’t go anywhere next Friday. Every day is the same to me. I haven’t got a job, so I don’t go anywhere.’

But on Thursday Tom had a letter. It was an answer to one of his letters! There was a job in a town thirty kilometres away. It was in a sports shop. The boss wanted to meet Tom the next day.

Tom felt very happy. ‘I’ll have to take a train there,’ he thought. ‘I can’t walk thirty kilometres.’

Suddenly he remembered the old woman at the fair, and he felt afraid. ‘Do not go anywhere next Friday,’ she told him.

‘But what can I do?’ Tom thought sadly.’I can’t lose this job. It’s too important to me. I’ll have to take the train tomorrow. And what can an old woman know about the future? Nothing!’

But he wasn’t very happy about it. And he didn’t sleep well that night.

The next day was Friday, and Tom went to the station. He bought a ticket at the ticket office. The train arrived, and he climbed on it.

An old man sat down next to Tom. His face was intelligent under his white hair. He had a bad leg, and Tom felt sorry for him.

The train left the station and went through the country. A waiter came round with some food and the old man bought a sandwich. Then he smiled at Tom and said,’Are you thirsty? I’ve got some tea with me. Would you like some?’

He smiled at the old man and said, ‘Thank you. I’m Tom Smith. Are you going a long way?’

But the old man couldn’t answer. Suddenly there was a very loud noise and the train stopped. What was wrong? The people on the train were afraid. They all looked out of the windows, but they couldn’t see anything.

The old man smiled. ‘Thank you, my young friend,’ he said. ‘I will stay here. My old legs are very weak.’

The guard looked at Tom unhappily. ‘There’s a large tree in front of the train,’ he said. ‘We’ll have to move it, but we can’t do it quickly. So this is the end of the journey for you. You’ll have to get off the train and walk.’

The guard looked at a map.’There’s a village near here. You can go there and perhaps find a restaurant or a cafe. I have to stay here with the train. I’m very sorry about your journey. But you’ll get your money back.’

Tom thought, ‘The money isn’t important. I really wanted that job!’ And he felt very sad.

Tom didn’t say anything about the job to the old man. He helped his friend off the train and carried his case to the village.

‘Thank you very much,’ the old man said to Tom. ‘I know that my case is heavy. There’s a computer in it, and there are a lot of papers.’

Tom smiled. ‘It’s all right,’ he said. But inside he was very sad. ‘I was stupid,’ he thought. ‘I didn’t listen to the old woman, but she was right. I won’t get that job now.’

So Tom told him the story about the job in the sports shop.

Then a strange thing happened. The old man smiled, and then he laughed! Why did he laugh? Tom didn’t know and he felt a little angry. The old man was his friend, but this was a bad day for Tom. It wasn’t funny!

Tom couldn’t speak or smile. The old man saw this and he stopped laughing. Then he said, ‘Listen to me, Tom, and don’t be sad. I’m a rich man. I’ve got a lot of shops in different towns, and they’re all sports shops. I want an intelligent young man to work in my new shop. It’s also my biggest shop! Will you work for me? I think I know you now. You were very kind to me on the train. You’re the right person for the job. What’s your answer?’

‘This is wonderful,’ Tom said with a happy smile. ‘This is the best day of my life, not the worst!’

Double click on any word on the page or type a word: